How to control Mosquitos with Bats

The arrival of Zika virus in America has triggered widespread alarm and a search for mosquito control remedies. It is carried by mosquitoes belonging to the genus Aedes that appear to be active both night and day. As in the control of other mosquitoes, a variety of options should be considered.

Existing chemical pesticides typically cause more long-term problems than they solve. Chemical poisons kill natural mosquito predators more effectively than mosquitoes. Over time, predators of mosquitoes such as fish, other insects, and bats (with much smaller populations and slower reproductive rates), die out while mosquitoes develop resistance, multiplying in ever larger numbers in a losing battle often referred to as "the pesticide treadmill."1 As resistance develops, larger quantities or increased toxicity are required, eventually threatening environmental as well as economic and human health.

Biologists at the University of Michigan were the first to conduct an experimental assessment of the impact of bats on mosquitoes. They documented that bats can significantly reduce numbers of ovipositing mosquitoes and suggested that "bat predation on mosquitoes could help regulate disease vectors."3 A Wisconsin study documented frequent bat predation on 15 species of mosquitoes, including 9 that harbor West Nile virus.4 Claims that bats are irrelevant to pest control typically come from those who benefit from sales of chemical alternatives or bat exclusion services.

Bats Can Eat Up To 1000 Mosquito Per Hour

Individuals of some bat species can capture up to 1,000 mosquitoes in a single hour,5 and large colonies can consume amazing quantities. For example, a Florida colony of 30,000 southeastern bats was calculated to capture 50 tons of insects annually, including over 15 tons of mosquitoes,6 and from 77.4% to 84.6% of little brown bats living in the northern U.S. and Canada eat mosquitoes. 7,8 Because mosquitoes do not take evasive action, and are exceptionally easy to capture, bats sometimes appear to prefer them over larger prey.9, 10 Bats can be attracted to live in bat houses,11 and nursing mothers can eat up to their body weight in insects nightly.12

Nevertheless, despite the numbers of mosquitoes that bats eat, simple provision of additional roosts should not be promoted as more than one potentially helpful step toward solving mosquito problems. In some cases bat houses may help and in others, they may not. Bats are one of several groups of animals that naturally prey on mosquitoes. Their relative importance varies from none to high in different locations.

No single approach to mosquito control is appropriate for all locations. However encouraging natural predators should be an important priority in long-term planning. Anything that can be done to facilitate mosquito predation by aquatic insects, fish, or bats may prove helpful. Bats have traditionally played a valuable role, thus, all possible precautions should be taken to ensure their continued presence. And where bats are known to have declined, their recovery should be encouraged.

Putting up bat houses may be quite helpful in places where appropriate bats can be attracted, but even successful bat houses do not always attract a species that feeds heavily on mosquitoes. Some bat-house-dwelling species prefer moths or beetles and may prove more helpful in protecting your yard or garden. Either way, bat houses can be beneficial, and attracting bats is far safer than applying toxic chemicals.

It is unrealistic to even attempt total control of mosquitoes. In most cases, this is impossible for more than brief periods, though mosquito numbers can be substantially reduced. Poisoning will only exacerbate long-term problems.13,14 First lines of defense should always include elimination of as much temporary standing water as possible, and can be as easy as regularly emptying (or changing) water from flower pots, bird baths, clogged rain gutters or other water-holding containers.  Such simple approaches can work wonders in reducing mosquitoes. Finally, introducing mosquito-eating fish into permanent ponds and providing roosts for bats can further aid in success. Responsible mosquito reduction typically requires a multifaceted approach.

Bat houses are most likely to succeed where bats are already known to use old buildings. Such roosting habitat is gradually being replaced by structures that are unsuitable for bats, forcing them to find new roosts or die. All American bats are beneficial in keeping the vast numbers of night flying insects in balance, though their primary diets vary considerably.

If you're interested in purchasing a bat house we manufacture them in several sizes with your choice of paint or stain and type of roof as well as an option for mounting brackets. They are all recommended by BCI, and now certified by MTBC.

Here is information on just 2 of the different viruses carried by Mosquitos: 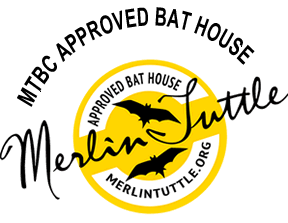