Don't panic. The solutions are simple.

Bats are rarely aggressive, even if they're being chased, but they may bite in self-defense if handled. As with any wild animal, bats should never be touched with bare hands. Always wear gloves when removing bats. Only a small percentage of bats (about one-half of one percent overall) have rabies, but anyone bitten by a bat should immediately seek medical consultation.

A solitary bat - often a lost youngster - will occasionally fly into a home, garage or other building through an open door or window. When this happens, the bat's primary goal is to escape safely back outside. As long as no direct human contact with the bat has occurred, it can be released outdoors.

These bats will usually leave on their own if a window or door to the outside is opened, while interior entrances are closed.

If the bat does not leave on its own, it can be safely captured and released outside. (See the illustrations below). Wait until the bat lands, then cover it with a small box or other container. Slip a piece of cardboard between the wall and the container, gently trapping the bat inside. Wait until nightfall and, with the bat inside the cardboard-covered container, take it outdoors and release it.

Most bats, however, cannot take flight from the ground. The bat can be released by holding the container aloft, lifting the lid and gently tilting the container to the side. The bat should fly out and away. Or you can hold the container against a high wall or the branch of a tree and slowly remove the cardboard. After a few moments, the bat should cling to the surface and can be left there.

If the bat appears unable to fly and falls to the ground, it may be injured or sick. In that case, gently return it to the box, cover it and call a local wildlife rehabilitator (Michigan Bat Control, Bat Specialists of Michigan, Animal Pro Inc.) or your local animal control or public health office. 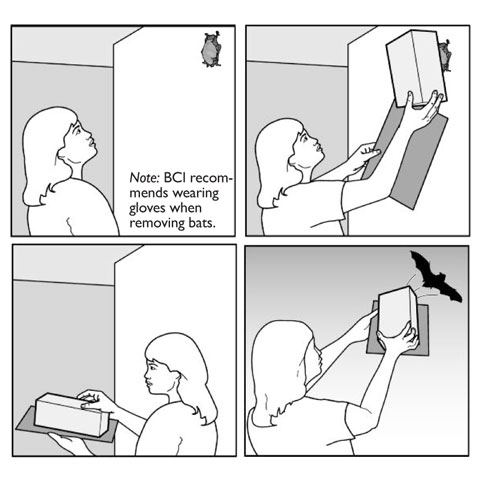